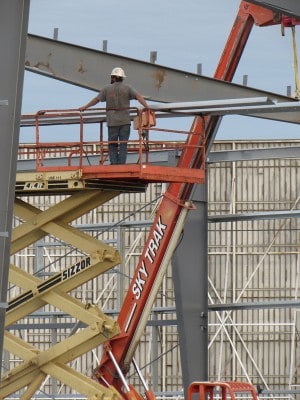 No matter where you live, what your job is, or how experienced you might be, accidents with equipment can occur at any unexpected time. Scissor lifts, for example, may seem simple and harmless. However, recently there were several fatal accidents with scissor lifts that occurred on site at facilities under construction, proving the seriousness of any accident.

In Adelaide, the Royal Adelaide Hospital has been under construction for several months. While these busy workers may have thought they were being careful, accidents do happen, as they discovered with the second death of a worker within a twelve month time period, both in fatal scissor lift accidents. How do two workers suffer the same fate, both with scissor lifts?

In November of 2014, 54-year-old Jorge Castillo-Riffo suffered serious neck and back injuries when he was crushed between a scissor lift and a concrete slab. Mr. Castillo-Riffo's death may have been an accident, and certainly wasn't criminal, yet it was still tragic. The partner of Mr. Castillo-Riffo has recently called for scissor lift safety procedures to be reviewed, after the death of a second man occurred on the same construction site only months later, and in the same manner.

63-year-old Steve Wyatt died on site in February, after being crushed between a scissor lift's handrail and a doorway. This happening, so close to the previous accident, allowed workers to walk off the site and the site was closed down. At this specific site, the Royal Adelaide Hospital, scissor lifts will not be used at the site until further notice. However, not all construction sites have halted the use of scissor lifts.

Similar accidents have also occurred, such as the death of Stephen Whitehead. He was also the victim of a scissor lift accident, although the situation was slightly different. Whitehead, unfortunately, fell from the basket of a scissor lift, while at least 35 feet in the air. OSHA has been involved in all of these accidents, and will determine if safety violations might have contributed to these accidents.

Did the operator move too quickly, or were they aware of their surroundings? Were the controls previously tested? Was proper fall protection used? These types of accidents, even scissor lift accidents, are preventable with the proper training and precautions.

These types of accidents are more common than you might think, and each one is tragic. Training in scissor lift training may prevent accidents such as these previously mentioned, as well as the accident in the video below.

There are several options available, if you are in need of scissor lift training, including: