Just when you think you have seen it all, something like this happens. We hate to be painfully obvious, but what are the hazards that you see in the excavator images below? Scroll down to see one of our trainers' analysis! 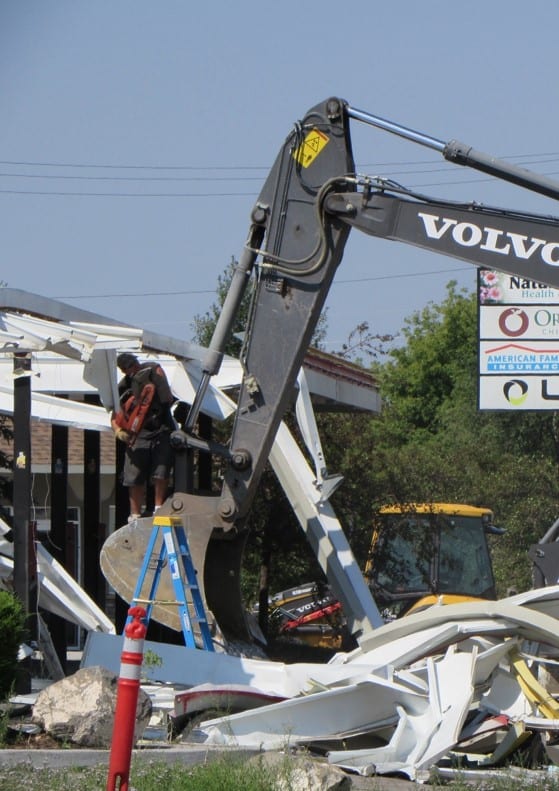 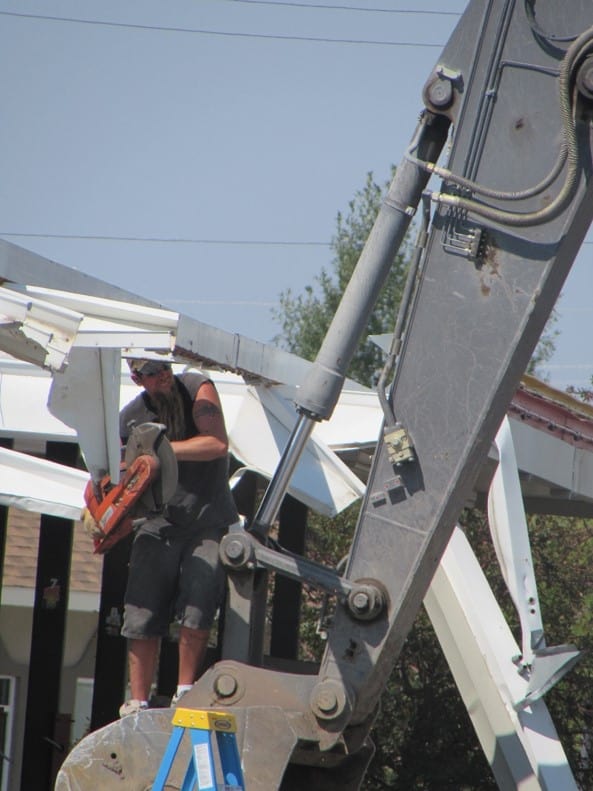 Okay, I hate to be all "gloom and doom," but it is this kind of behavior on the job site that will--yes, will--eventually lead to an accident of one kind or another; may it be nothing serious.

Now, it's hard not to look at this and laugh because it is so obvious that what is happening is dangerous and, simply put, against all reason and common sense. To be more specific, though, there are two things here that we see often enough they bear pointing out:

1. Riding on the bucket. How shall I say this? Don't do it. One, it's against regulations and two, it's not very smart. In this case, the worker on the bucket would shout out to his co-worker in the excavator cab to lift him "up higher." The worker with the saw would then brace himself against the excavator's arm and/or the remains of the eves to keep from falling while the bucket was raised or, when demanded, lowered. At least they had open lines of communication. But still, one slip or one careless move from the excavator operator, and the worker in question could have easily fallen, hit his head, dropped the saw, etc. Or worse, imagine what might have happened had he slipped or fallen while operating the saw. So let me say it one more time: never ride on or in the bucket, never. And as for excavator operators, you should never allow anyone to ride in or on the bucket.

2. Personal Protective Equipment, otherwise called PPE. It is required. And where it is not specifically noted, the OSH Act of 1970 among other regulations, which are still in effect today, make it very clear that it is the employer's responsibility to prevent potential accidents by planning for and requiring protective gear appropriate to the task at hand. In this case, sneakers, shorts, a short-sleeved shirt, and a baseball cap don't cut it; they are not going to protect anything. At the very least, the worker should be wearing a hard hat (due to the potential for head injuries), long pants, work boots, and protective gloves. A long-sleeved shirt, a high-visibility vest, and earplugs would also be wise. A lot of times it seems like such a bother to wear PPE; other times it feels too hot to put all of that gear on. But those simple articles are there to protect you, so wear them.

Having said all that, while it is true, the employer is ultimately responsible, it does not mean employees can do something stupid and not be held accountable. This is especially true if the employer initially trained against such behavior and then the employee was found to have disregarded that training. In such a case, the employee would suffer the consequences alone.

In the end, though, it takes a team to stay safe. With that in mind, everyone on a job site has the responsibility to watch out for the "next guy." If you see something wrong, address it; bring it to the employee's attention, or make your employer aware of the potential for danger. Everyone has the right to a safe workplace, and every family supported by heavy equipment operators has the right to have their parent, child or spouse return home each night, safe and sound.