With the recent release of OSHA's preliminary top violations list for 2015, and with a lack of adequate fall protection and scaffolding issues landing on that list in the first and third spots, respectively, we decided to take a stroll and snap some photos of the scaffolding near us. Without fail, we found scaffold violations on virtually every single work site: missing toe boards, inadequate railings, missing sole plates, casters on dirt, casters that weren't locked, cracked or missing planks, jury-rigged ladders, illegible warning labels, no fall arrest gear, close proximity to power lines, a general lack of training--the list goes on and on. 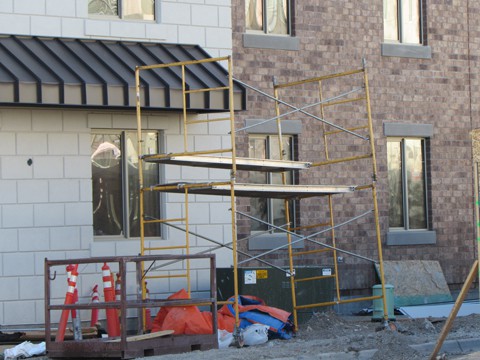 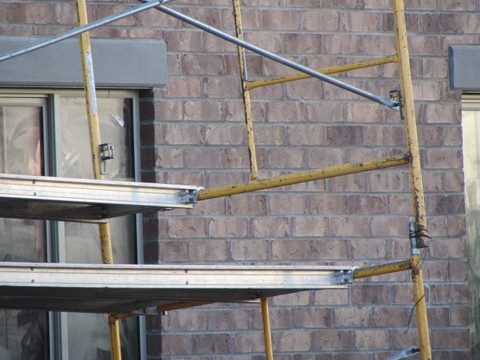 To preface the images here: yes, there were men working on this scaffolding earlier in the day. At the time, it was not in the same position; it was a littler farther down where they were laying brick. BUT the same issues that exist here existed there. Now, take a look at the first image here. What do you see here that might be an issue? First, from a general standpoint, this is a pretty cluttered work site. And it was earlier too. Workers were coming and going. Pedestrians were coming and going. Telehandlers were coming and going, delivering brick. There were barricades around waiting to be used, but they were not being used to protect the scaffolding. Second, this scaffold has casters, which should only be used on cement. Here, they were on loose, uneven soil and there were blocks of wood placed underneath to try and level it. Now take a look at the second picture. Do you see something here that was hard to detect in the first image? The scaffold is jury-rigged together. Somewhere along the line, it had been damaged or bent so that it did not connect as intended by the manufacturer. So they got some wire and strung it together. Would you work on this scaffold? Would you dare climb the ladder to the next level if it wasn't connected properly?

Below is another example of scary scaffolding we came across. Caution is right! On the positive side, at least they put a few cones out there in an attempt to barricade and protect the scaffold and worker. But you might have expanded that barrier a little. In fact, on several occasions, we watched pedestrians walk between the too--too close for my liking if I were the worker in the air.

So what do you see? Are there any potential issues that stand out to you? The planking seems suspect,
for sure. The casters are on cement this time, so that's good, but if you look closely, the front right one is not even locked. And what about that second level! That's the scariest part of all. Take a closer look. Yes, those are casters carefully placed behind a small board nailed into a sloped roof. And although you cannot see it here, one of them is also not locked properly. There are approved methods and approved scaffolding and devices to help you work on pitched roofs. This, of course, is not one of them. 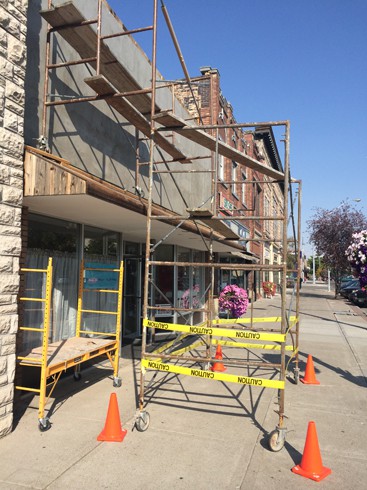 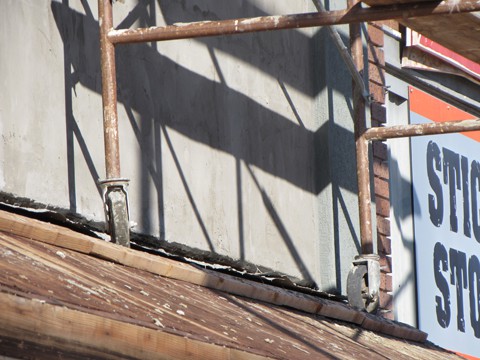 There's a reason why scaffolding is the third most cited violation this year, and why it is consistently in the top ten every year. Too many employers are not training their scaffolding workers and too many workers are incorrectly setting up scaffolds out of ignorance, a lack of training, bad habits or in an effort to save time and money. While it should go without saying, never set up, use or allow anyone else to set up or use scaffolding like these examples or if you have any reason to fear for your safety. And, for heaven's sake, make sure you receive the appropriate training before working on or around scaffolding.